There are continuous calls from the Arch Remainers such as BBC, Clegg, Cable, Heseltyne, Clark, Soubry etc for the UK to stay in the Single Market post Brexit.

The Single Market and the Customs Union are one and the same thing.

The Customs Union is to make it expensive to export into the EU to protect EU trade. It makes it expensive for the UK to import the cheaper goods from the Commonwealth and elsewhere in the world.

The EU want the UK to be unable to do any Trade Deals with other countries if they make the UK more competitive than the EU.

It is of prime importance to understand that under World Trade Organisation rules UK would have full access to the EU Single Market without being in the EU.

If we stay in the Single Market this lady will have full control of UK’s trading. She is a Uni Lecture in politics and has never had a job in industry nor commerce. 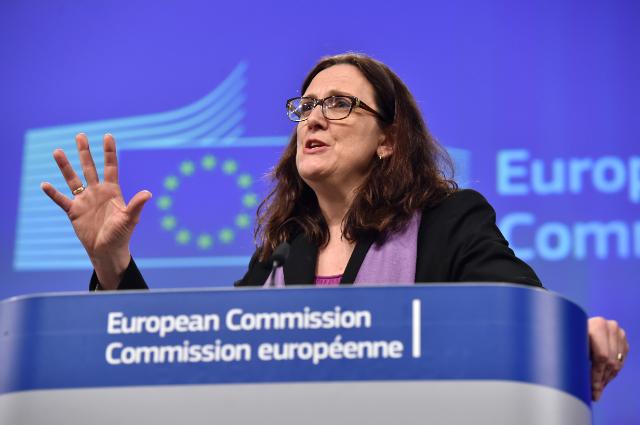 The Single Market is not a ‘stand alone’ option. It is but one of four pillars of a Single Regulatory Regime. They are the essential and fundamental tenets of the EU and cannot be changed.

Why? What is it that about the Single Market they consider so essential that UK stays in post Brexit? It is certainly not Pettycoat Lane writ large
Well it is not really a market at all –  it is a Single Regulatory Regime and the Single Market is only a part of it. It includes several political clauses that ensure the EU keeps complete control of any country foolish enough to sign up to it.
It is also a Customs Union to protect French agriculture and German industry by making imports more expensive.
The Remainer’s demand is for UK to be in the Single Market and only mentioning the Single Market without including the other clauses. It is their way to keep UK under EU control by the back door without the UK public realising the implications.
These pillars include:
This would include non EU people from anywhere in the world who have been give EU passports to enable them to move from any EU country to UK
The remit of the EJC is not to administer justice but to make judgments that further ‘ever closer union’. This would make the UK Supreme Court no more than a body to rubber stamp EJC judgments with no right to question or amend them.
Free speech and individual rights of British subjects enshrined at Runnymede would be null and void. It involves arrest without evidence and by no more than rumour. It would be
illegal for UK subjects to criticise the EU. The Spanish Advocate General of the EU Court of Justice has claimed that “Criticism of the EU is akin to blasphemy and could be restricted without affecting Freedom of Speech”  It is now a criminal offence to criticise the EU as of  2013-002 and 2012 – 033
There are thousands of such standards and regulations that act as a ball and chain on our companies seriously restricting their ability to operate competitively. Sadly many of these Regulations were ‘gold Plated’ by our Health and Safety Exec to make UK commerce and industry even more uncompetitive.  Before joining EU British Standards were democratically set up by committees of those involved not bureaucrats who have never worked in ‘the real world’.
These are euphemistically called the ‘Four Freedoms’ by the EU. They are in fact chains to bind a country into permanent subservience to the EU.
Three other small points
80% of UK trade with EU is SERVICES and not goods – Services are regulated by G20 and not WTO, SM or CU. Services are NOT part of the EU Single Market.
The EU has claimed it has been responsible for peace in Europe. Not so – it was NATO on the East German border and the nuclear balance.
The EU claim responsible for getting rid of mobile Roaming charges? It was an international agreement where over 50 countries have removed them not just the EU.

It is of prime importance to understand that under World Trade Organisation rules UK would have full access to the EU Single Market without being in the EU.

USA, Australia, New Zealand, China, India etc are not in the Single market and have no problems whatsoever trading with the EU. 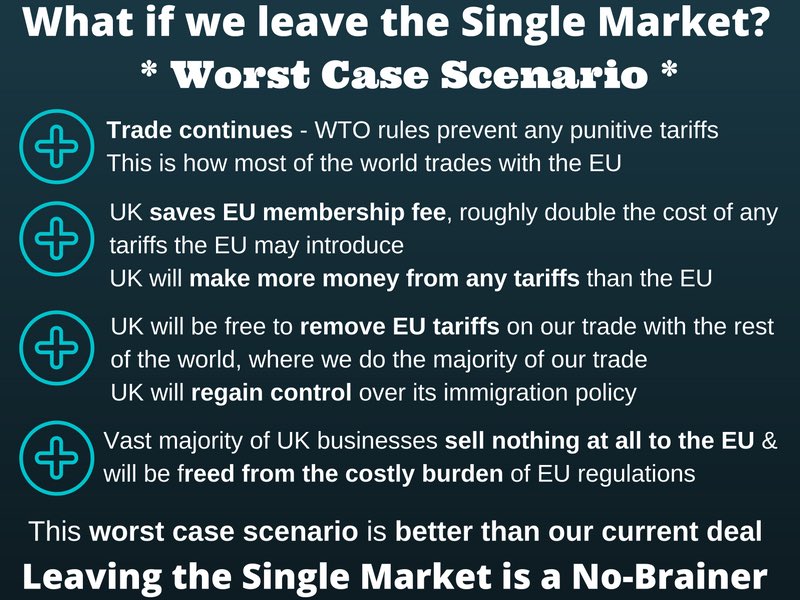