To obtain a copy

Tony Blair has said that the British public were not told the facts of the EU pre Referendum. We did receive a comprehensive leaflet from the gov but much relevant info was missing. The missing info is within this book

If you find it of interest then hopefully you will recommend your followers.

This book is essentially an audit of the EU

LEARN ABOUT THE HISTORY AND AIMS OF THE EU

This not a normal book with a flowing narrative. It is a compilation of relevant articles, comments and quotes combining like pieces of a jigsaw that fit together to give the whole picture.

Mick Greenhough was a committee member of the Leave.eu campaign. During that time he was amazed at how uninformed the majority of both Remainers and Brexiteers were about the true nature of the EU.

The reporting by BBC and the mainstream media has been, and still is, woefully inadequate and thoroughly biased both pre and post the referendum.  Brexit was exaggerated somewhat but Remain was riddled with inaccuracies, fabrications and gross unsubstantiated speculation.

Schools and Universities have also consistently promulgated a very lopsided view of the EU to their students to such an extent that they have been teaching propaganda rather than balanced information for reasoned debate.  Whether this was deliberate or through ignorance it is difficult to determine. 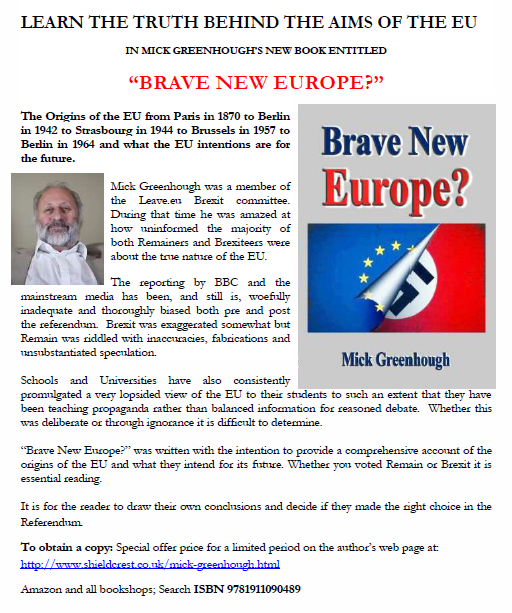 ‘Brave New Europe?’ was written with the intention to provide a comprehensive account of the origins of the EU and what they intend for its future. Whether you voted Remain or Brexit it is essential reading.

It is for the reader to draw their own conclusions and decide if they made the right choice in the Referendum.

To obtain a copy: Special offer price for a limited period on the author’s web page at: http://www.shieldcrest.co.uk/mick-greenhough.html