The Media seems to restrict much information to the public. The Global Warming scare is on steroids. Anyone who is of the opposite opinion is canceled eg  David Bellamy. Why? 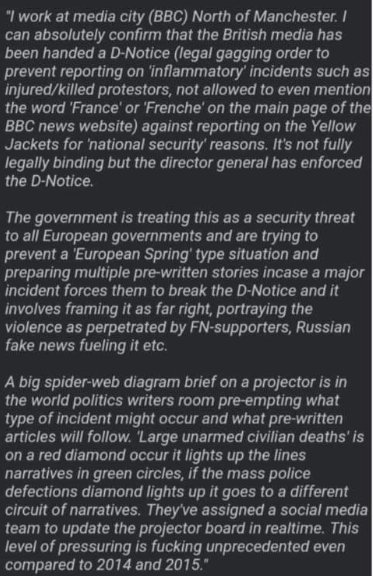 WWI demonstrated to the Establishment the power of propaganda to mold the opinions of the public. Goebbels raised it to an art form and it has been refined considerably since. The Goebbelisation of news is now widespread within the MSM and TV channels. Commonly called Fake news and is used to deceive the public.

The majority of the world’s Media are now owned by about 5 families who all seem to universally lean towards the Authoritarian New World Order. Hence the lack of diversity in news reporting. The new news programme seems much more balanced GBNews on channel 515

e.g. The MSM and TV continually refered to the EU as a Single Market and deliberately not mentioning it includes unlimited migration from the EU and complete subservience to all EU law and regulations and complete transfer of all UK sovereignty to Brussels.

e.g. BBC programme Question Time usually had a panel to discuss Brexit of 4 Remainers and 1  Brexiteer. To match the Referendum it should have 3 Brexiteers and 2 Remainers.

Operation Mockingbird is a covert project to gain control of the world’s media. Started by the CIA but has now been hijacked by the New World Order.

The Main Stream Media have a fairly common generally left-wing bias – particularly TV. The Soviets claim to have been able to insert Marxist journalists into most of the world’s media.  The BBC is a classic. Several of their senior political commentators were certainly Marxists when at Uni. There are reputed to be some 600 Common Purpose alumni in positions of authority in the BBC. Common Purpose is a crypto Marxist training college that teaches its alumni how to administer outside of the democratic process.

However those running Social Media started out wanting free speech for the ordinary citizen. They are now generally New World Order supporters who are allowing extreme left-wing views to flourish and censoring even soft right-wing views.

However Social Media has given ordinary people a worldwide voice outside of government control who were otherwise denied exposure. The Establishment are desperately trying to gain control of this ‘dangerous’ media that is out of their control. It was so effective that the Social Media giants stopped Trump from using it.

Mockingbird is a very little-known project reputed to be started by the CIA in the ’50s. It seems now to have been taken on by the UN and the New World Order. More info from the inside is needed.

The main job of the media now is to propagate NWO scare stories.