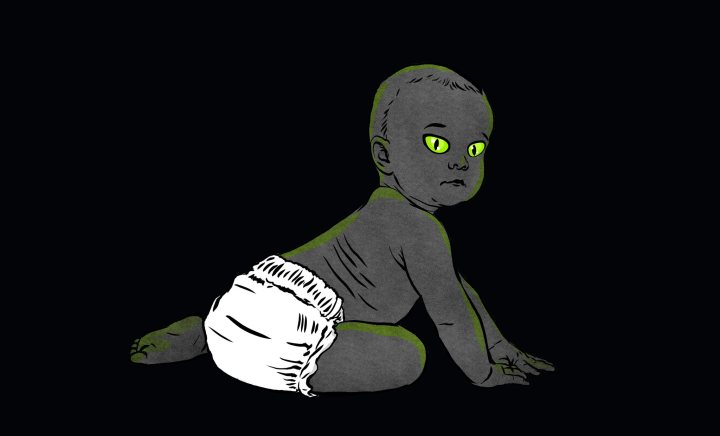 Back in 2012, WUWT reported on professor Liao’s bizarre human genetic engineering proposals to combat climate change – ideas so crazy even Bill McKibben thought they were stupid. Unsurprisingly, the idea is still circulating, even gaining traction among some radical greens. The latest manifestation is a positive review of Liao’s plans in Australia’s mainstream news.

Humans of the future: Short, allergic to meat and with night vision

HAVE we been looking at the climate change issue all wrong?

Scientists are becoming increasingly interested in whether changing ourselves instead of the environment could be the unexpected solution to the world’s biggest problem.

The controversial idea of “human engineering” to lower our impact on the planet was suggested by New York University bioethics professor S Matthew Liao in 2012, who said the concept was “potentially less risky than geoengineering” and “could help behavioural and market solutions succeed in mitigating climate change”.

But the idea hasn’t gone away. Gizmodo’s Meanwhile in the Future podcastthis week examined some of the specific ideas to see how altering our bodies might fix our planet. And this is just a starting point: the possibilities are endless.

The first proposal we cover is night vision — the idea that we could genetically engineer humans to have more rods so we could better see at night, and thus reduce our dependence on electric lights.

Smaller people, quite logically, tend to use up fewer energy resources. We were much shorter 100 years ago, and Prof Liao says we could go back.

Mental alterations are even more divisive than physical “improvements”. Could making us smarter guarantee better choices? Prof Liao suggests administering drugs including Ritalin and Modafinil to improve our intelligence, pointing out the link between cognitive ability and having fewer children.

But it’s complicated. There are other factors at work, including education, healthcare and economic and social conditions. And it’s not always the cleverest people who make the best decisions. …

Liao is very clear that he has no plans to force anybody to be shorter or to take Modafinil. But eugenics actually didn’t start out as something that was forced on people — many of the early eugenics proponents were all about choice. Francis Galton, the cousin of Charles Darwin, saw the idea of selective breeding as something that would become a “civil religion.” As Allen Buchanan, Dan W. Brock, Norman Daniels, and Daniel Wikler write in the book From Chance to Choice: Genetics and Justice:

If there was a core belief common to all eugenicists, it would have to be expressed in the most general terms: concern for human betterment through selection—that is, by taking measures to ensure that the humans who do come into existence will be capable of enjoying better lives and of contributing to the betterment of lives for others.

I’m not saying we’re one step away from Nazi-style eugenics here. But this is a road we’ve been down before, and it didn’t end well for us. So we should think carefully about this possible future. Climate change is a really tough problem. It’s going to require a whole lot of different (and even weird) solutions to make the future livable and just. But we can’t forget history as we forge into the future.

In some ways I find Professor Liao’s ideas on mass administration of drugs even more disturbing than his genetic ideas. Ritalin is a powerful stimulant which is sometimes prescribed to children with attention deficit disorder. In small doses, in very controlled circumstances, it can help people with brain chemistry imbalances focus on tasks, and lead a more normal life. But Ritalin is hideously addictive and has dangerous side effects. It is one of the most widely abused street drugs. Its street name is Ice, or Meth – Ritalin isMethamphetamine.