United Nations Migration Agency Director-General William Lacy Swing has issued a barely concealed attack on the U.S. President, claimed mass migration is in the “national interest”, and that concerns about migrants are based on “false stereotypes and unfounded fear”.

“People say … we don’t want any migrants, build a wall and burn the bridge,” Swing sneered. “They identify [migrants] as ‘the other’. That is a big fear,” he claimed.

The former U.S. diplomat issued his thinly veiled attack on President Trump in an interview with the Korea Herald, buttressing it with a sustained assault on populism more generally.

“It is very toxic in nature, built on a lot of false stereotypes that they are coming to take our jobs and bringing in criminal elements, probably bringing in diseases. None of which was proved,” he claimed.

The statement seems incredible, considering the ferocious violence which migration-background organised gangs like MS-13 are known to employ in the United States, or the mass sex attacks by migrants on New Year’s Eve in Germany, among other examples.

In terms of disease, it has also long been established that mass migration from the Global South is worsening public health in the West, with migrants known to have doubled the rate of HIV, trebled the rate of tuberculosis, and increased by twentyfold the rate of hepatitis B in the United Kingdom as long ago as 2003. 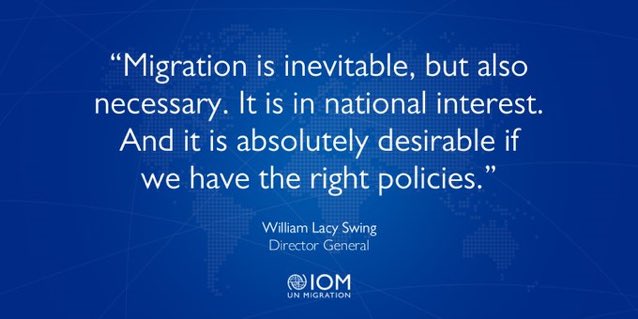 Swing attempted to sell his interviewers on the idea that “Migrants are [the] ultimate agents of development,” claiming they should be pushed on prosperous South Korea as an alternative to increasing automation and productivity because “robots don’t pay taxes”.

“[Migration] is inevitable, but also necessary,” he insisted.

“It is in [the] national interest. And it is absolutely desirable if we have the right policies rather than being stuck in the past, he ” he added — suggesting national should use their visa systems more “resourcefully.”