Whenever a Leftard is losing an argument they resort to accusing their opponent of being a ‘Racist’. You know then they have no rational argument.

What is the accusation of ‘Racism’? It is a political tool used by the Frankfurt School and their followers to silence valid comments they do not wish the general public to voice or hear. It is to suppress free speech. It is an invention of Leon Trotsky
It is a personal attack by the Leftards to damage your character when they cannot destroy your argument.

If it is used in the context of conflict or even hatred between ‘races’ and is a complete misunderstanding of race. There is a lot of confusion over what is a Species, a Race or a Breed. Species and Race are essentially the same. Breeds are the same race with different characteristics.

The old 19cent classifications of Black, White, Brown and Yellow have been made quite redundant by advances in our understanding of genetics.

It is important to understand that there is only one ‘race’. Indeed Race is now the wrong word. We are a Species that is Homo Sapien that consists of many cultures. We all have the same DNA and a Patagonian Indian can have fertile children with a Siberian nomad. Therefore we are all the same Species. If we were not then they would not be able to have children or if they did they would be F1 hybrids and infertile. (ie the horse, the donkey and the mule – you cannot breed mules from mules). Dogs are all the same ‘race’ – Species  but many Breeds as all canines can crossbreed to produce fertile puppies.

However nature goes to great lengths to evolve very specific courtship rituals to ensure that Swans only mate with Swans not Canada Geese.

Conflicts between peoples is nothing to do with ‘Race’. The conflicts are between cultures or political creeds.

The Ancient Greek Herodotus in his Histories recounted the way  two tribes disposed of their dead. One tribe burnt them the other devoured them. Both were equally horrified and disgusted at the custom of the other.

The’English’ are not a race – they are a Tribe consisting of elements of many other very closely related tribes from the North West Germany and Scandinavia.

A minor local politician used the common English term ‘Chinky’ to describe a Chinese restaurant sometime in the past. This suddenly became national news ‘as proof without doubt’ that he and his party were unmitigated ‘Racists’.
Was this a sudden indignant outcry from hundreds of offended members of the Chinese community? Apparently not. Was it a comment from someone the journalist had casually met in on of the W London bijoux wine bars? Could be. Or was it part of an orchestrated campaign by a shadowy Frankfurt School (see theeuroprobe.org 2012 – 025) group generated for political advantage and a long term plan to restrict free speech? More than likely.
We don’t know who said it was a racist comment. It could be anyone or no one.
We don’t know as that vital information was omitted by the journalist in his article.
Without that information it was essentially a non-story jacked up to be a scoop that filled a column in a newspaper with a political agenda and secured a fee for the journalist.

Another example is of an actor referring to ‘coloured’ people that resulted in an orchestrated campaign in the press to vilify and condemn him for using such an allegedly ‘racist’ term. Again the people accusing him of ‘racism’ were not identified. By some bizarre reasoning had he used the term ‘people of colour’ instead that apparently would have been acceptable to his critics – whoever they are. How very peculiar. Indeed the Selma star David Oyelowo said the racism accusations are ‘ridiculous’

Racist is a term used by the hard left to try to silence those they oppose. It is the same as Political Correctness. Again who is the arbiter of PC, who elected them? They are self appointed linguistic Stazi and have no authority other than that the recipients of their tirades give them.

A very well written and informative article by Al Benson Jr. copy and past into Google.
https://revisedhistory.wordpress.com/2012/10/18/who-originated-the-term-racist-and-why/

We have all heard the term “Racist” often more than we care to. It seems as if the politically correct draw the word like a pistol every time they want to verbally mow someone down. Unfortunately it often works and the person who has been labeled a racist or guilty of “white racism” (it’s always white racism, never racism of any other color) slinks off into a corner somewhere and remains silent from then on out, which was the reason for using the term to begin with. It silences dissent.

In an article on http://patdollard.com published in 2010 the origin of the word is dealt with. The article observes: “The word ‘racist’ has for a long time been the single most effective fear-word in the leftist and neoconservative arsenal. For decades they have successfully used it in the political arena to slander traditionalists, shut down debate, and leave opponents running for cover…What surprisingly remains almost totally undisclosed, even on the hard core traditionalist Right, is the word’s origin. Did it come from a liberal sociologist? A 60s Marxist college professor? Perhaps a politician in the Democratic Party? No, it turns out that the word was invented by none other than one of the principal architects of the 74-year Soviet nightmare, the founder and first leader of the infamous Red Army, Leon Trotsky.”

The article notes Leon Trotsky’s 1930 work, The History of the Russian Revolution and it shows a passage from that book. The last word in a particular passage in that book has a Latin transliteration which is “racistov”, i.e., “racists” The article says: “This work here is the first time in history one will ever find that word.”

So, if this article is correct, the originator of the term “racist” is the original Trotskyite.

However, the dubious foundation of the term has not kept college professors and other instructors of our young folks from latching onto the term and co-opting it for propaganda purposes. Trotsky would be overjoyed!

In the summer of 2007 I did an article for http://albensonjr.com dealing with the University of Delaware when they tried to implement a mandatory program that required all residence hall students to acknowledge that “all whites are racist.” An article on http://voices.yahoo.com for November 1, 2007 noted: “Citing that racism is a term that applies ‘to all white people living in the United States, regardless of class, gender, religion, cultural or sexuality’ The school goes on to offer ‘treatment’ for any ‘incorrect attitudes’ the students might have upon entering the school.” So the school planned on offering treatment to white students with “Incorrect attitudes” presumably to help to expunge their sin for being born white. The author of the article said: “Wow! To think I once left a Communist country to get away from such oppressive left wing doctrine only to find it within a state university in the United States of America.” How far is all this away from George Orwell’s “thought police” or “thoughtcrime?”

There must have been quite a fuss over this, because on 11/2/07 the University of Delaware cancelled its “all Whites are Racist” program.

This is a pile of cow chips that you don’t want to kick on a hot day. Anyone honestly believing this stuff is more than challenged in the brain department. So we now take a word invented by a Trotskyite Communist and demean all white folks the world over for being white. How asinine can you get? Apparently if you work on a college campus there are no limits.

Anyone remember Michael Westerman who was killed in Kentucky by a bunch of black thugs because he had a Confederate flag on the back of his truck? They didn’t like the flag so they shot him. He died, but if you accept the convoluted reasoning of the politically correct crowd it was really his fault because he had the flag on his truck and it “offended” them, so they were thereby justified in taking his life.

Was killing him a “hate crime?” Heaven forbid, no. Now if he had killed one of them it would have been a hate crime of international proportions but because they killed him it’s hardly worth the mention. After all, he was white so he had to be a racist, right?

This is the kind of twisted thinking that goes on at many college campuses around this country. Writer William Lind once wrote an article in which he labeled many colleges in this country as “little ivy-covered North Koreas.” Mr. Lind was right on the money. I’ve seen what goes on at college campuses and it ain’t always pretty—but it is politically correct, and no matter how many lives get ruined the god of political correctness must be served—and sacrificed to.

Seems to me that those that believe and promote this garbage are the biggest racists of all.

It should be remembered that the Atlantic slave trade was stopped by the Royal Navy. 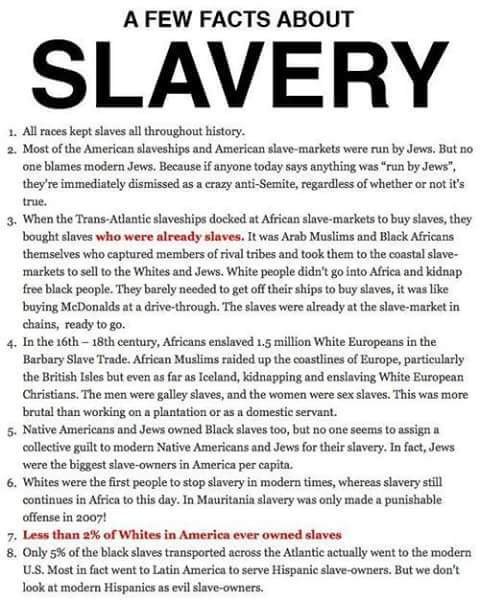