Brexit. Should it be by negotiation with the EU under Clause 50 or cut the Gordian Knot by repealing the 1972 Act?

What if we go the Lisbon Clause 50 route?

It will give the EU several years to prevaricate and keep kicking the can down the road. The EU will heavily ‘bribe’ the BBC, Universities, Charities, and our ‘independent’ national establishments to continually pester for Remain. We would also require the agreement of other EU countries who currently rely on UK continually funding them.

The EU never acts directly in a country but by proxy through existing national organisations hollowed out and stuffed with pro EU personnel on excessive salaries and pensions to ensure they remain ‘on side’. e.g. Universities etc are funded by the EU with money from UK but they first cream off much of that money before giving some back a UK University.

We will be negotiating with very devious, slippery people who will lie and deceive without compunction. History shows that UK negotiators are not up to competing with them. In 1972 the EU negotiators made complete monkeys out of our complicit negotiators. We would be negotiating from a position of subservience.

The EU will demand horrendous financial penalties (possibly such as the EU demanding they keep our fishing grounds) and we would still be controlled by EU Directives, such as ECHR and migration, until a settlement is reached – perhaps several years. There is also the problem of UK EU bureaucrat pensions. They are working for the EU so the EU is liable for their pensions. Something the EU will try to wriggle out of.

The Single Market is a trap to allow Brussels to keep control.

The only way this option could be considered is if there were a complete hiatus in all EU legislation directed at the UK during the negotiations. Very unlikely.

What if we go the repeal of the 1972 European Communities Act route?

This can be done within 24 hours if our MPs are so minded and we are out. We will then be free of the EU Human Rights court, recover our fishing and have full control of our borders etc. etc. immediately.

Might be better to repeal first then unpick but unpicking from a position of strength as EU will have no control over us then.

It would still require a lot of renegotiation over several years to untangle the existing mess but we would be negotiating from a position of strength not one of subservience. We would be in the driving seat.

History has shown that whenever our naïve British bureaucrats deal with the EU they are beguiled with lies, sly tricks and dishonesty. The EU have no concerns whatsoever about indulging in dishonest and deceitful negotiation. The bureaucrats appointed to negotiate will be EU friendly and always go for appeasement and compromise and end up looking like monkeys.

Repealing the Act and overnight would create quite enormous difficulties. If the Act was repealed immediately but then implementation withheld for a year for time limited negotiations to take place to quickly resolve these difficulties. No opportunity could be allowed for the EU to prevaricate and string out the negotiations. With immediate effect ECHR, Free movement into UK and all Corpus Juris replaced back to English Common Law. All other EU impositions to be systematically removed over 2 years.

It should be noted that the Electoral Commission who made the decision as to which ‘Leave the EU’ groups will be made ‘Lead’ is not ‘independent’. It reports directly to the unelected Cabinet Office that is very pro EU. It awarded it to the leave group closest to the Establishment regardless of all other conditions.

This is incredibly interesting. It says we can leave the EU almost immediately by using a law from the 60s! Our departure will be strung out by those bleeding the country but there is no need.“We could also force the EU to invoke article 7 quite easily too, but I like this optionSerious stuff:

FROM: JULIAN WILSON.Sandra – here’s a piece I composed today after seeing disinformation on several of my group Feeds. Please feel free to use it. QUOTE Don’t waste time and energy about getting “Article 50 action” going – not if you want a quick Exit! . You are all being deliberately diverted away from the truth about the Legal Quick Exit Route which has been enshrined in Law since 1965 – yes, that’s right – 8 years before we joined the EEC. It’s called an “Emergency Order In Council” – and the current metro-Elite and brown-nosing “Sir Humphrey’s” would much rather that the Electorate doesn’t know about it! The referendum is purely “Advisory”. The Laws will not change quickly, – unless the Electorate forces the political Elite to ask for an Order In Council to repeal the “1972 European Communities Act, as Amended” which is the “enabling Legal Instrument” for everything EU-related which followed it. . Under arrangements made to cope with a devolution of government administration to the 6 Regional Seats Of Government during a possible nuclear war involving an attack on the UK , – AND NEVER ALTERED SO THAT THEY ARE STILL THE LAW OF THE LAND; – all that is required is a Quorum of 3 Privy Councillors, and the Lord President Of The Council, and Her Majesty at the end of phones in a conference call. “The Order gains legal force and effect the minute after Her Majesty approves it”, – down the phone*. [* This process was originally designed to allow very quick decision making and authorization during an Soviet attack on the UK which might drive the Government and the Crown to evacuate out of London]. The Establishment – which is now deeply involved in “damage control” – would rather that the Electorate is not aware that the Severance process could be so quickly managed. All the civil servants, political figureheads, Lawyers and Lobbyists who derive all- or part- of their incomes from EU-related activities/Associations/Groups or Quangos – would “scream” at being excluded from the process – because that would take work out of their hands; – but they should be ignored, when the EU is bleeding Britain dry at the rate of GB£Millions per hour! If that GB£18.2 Billion annual figure is correct – that is another GB£36.4 Billion of YOUR money that will be paid to the EU while the metro elite and their lawyers and civil servants, and lobbyists waffle – and why would they worry? It won’t be coming from THEIR bank accounts! Turning-off the “Money Valve to the EU” is the most urgent matter of all! UNQUOTE”

There are some 15 (possibly 40) Brexit groups who all have their target voters. The two largest are Leave.eu and VoteLeave.

Leave.eu is co-operating with many others as Grassroots GO to leave the EU completely. VoteLeave has resisted joining but now seems willing to co operate.

VoteLeave is essentially a government front to negotiate with EU after a successful Leave Referendum to negotiate for a reformed EU (impossible to achieve) and then a have second Referendum based on those negotiations. Their aim is to stay in a reformed EU. The EU has made it perfectly clear that any alteration to the EU remit is completely out of the question. Will waste several years of fruitless discussions. Any such ‘successful’ negotiations they achieve can be revoked later by EU as the Lisbon Treaty is an ‘Enabling Act’ and allows the EU to change any unbreakable agreements made to suit themselves without referring back to elected parliaments.

The House of Commons has many MPs who are there by not revealing their true intentions regarding our relationship with the EU. We need a General Election asap where all candidates would be required to formally state their positions on the EU. 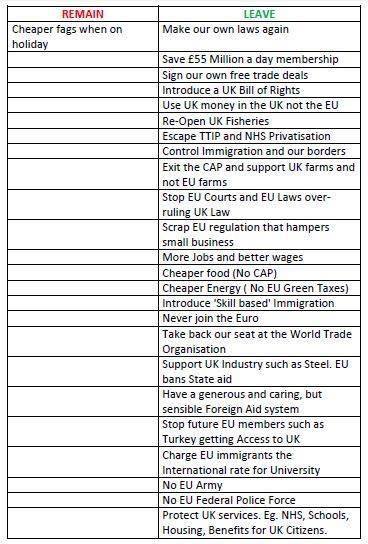