National Society of Prevention of Cruelty to Vegetables

I would like to put a few ideas to you for your consideration.

Firstly to put them in historical context. My first wife became involved with a group of FemiNazies when she was taking a degree in Sociology at Goldsmiths College in 1977. They then took off for Greenham Common in 1981 and became ‘Wimmin’. Strangely they also became vegetarians (Veggies) and some were really very aggressive about it too. It was at that time I formed the National Society of Prevention of Cruelty to Vegetables. The object was initially to mock them into giving a rational reason why they objected to killing animals to eat but were quite at ease killing vegetables (The Veg). I can tell you that their lack of logic was equalled only by their lack of humour.

A few of the aspects I tried to engage them in discussing are listed below (without much success I might add, as their reasoning powers were somewhat limited and their minds completely closed), plus a few more developed since;

You are what you eat – that’s why Veggies seem to end up with brains like cabbages. You only have to talk very briefly with a Veggie to realize how narrow minded, prejudiced, bigoted and intolerant one becomes due to the lack of good, red meat. We, as human beings, are all born equal. The only difference between Veggies and normal people is the lack of meat in their diet. Medical research is continually revealing just how much diet effects our mental stability so it is very difficult to avoid the blindingly obvious conclusion that the lack of meat in your diet turns you barmy.

The Veg have rights too – a potato has as much right to life as a lamb or calf. Just because a potato’s eyes are not soft and brown like a calf that’s no excuse to gouge theirs out, flay it alive and mash it up. How do you know that a potato has no soul?

As we share 50% of our DNA with potatoes and 80% with cows where is the veggies red line between 50% and 80%  where they will and will not eat? Cannot be the Sentience line as we now know that if trees are attacked by insects they emit chemical to warn other trees. Sentience surely but not one we can relate to.

It is the misfortune of the Veg that they move very slowly and have a very low ‘cuddly factor’. Life is life whether animal or vegetable. Because they do not squeak, purr, squirm, have warm fur or wag a tail it does not mean that they do not have rights, feelings or souls – it means that we have not, as yet, found the means of appreciating or communicating with them before they go to that great allotment in the sky.

We deplore the factory farming of vegetables – wheat, for example, is crammed into a field, grossly overcrowded all of its short, brutish (veggish perhaps ?) life of enforced boredom with no more room to do anything but stand bolt upright all day. They are left out 24 hours a day, exposed to any foul weather or scorching sun without shade or cover then, with thousands of others, decapitated when about to fulfil their sole reason for existence – the scattering of their seeds. The VLF (The Vegetable Liberation Front) goes around at night opening the gates to let the wheat escape to roomier pastures. 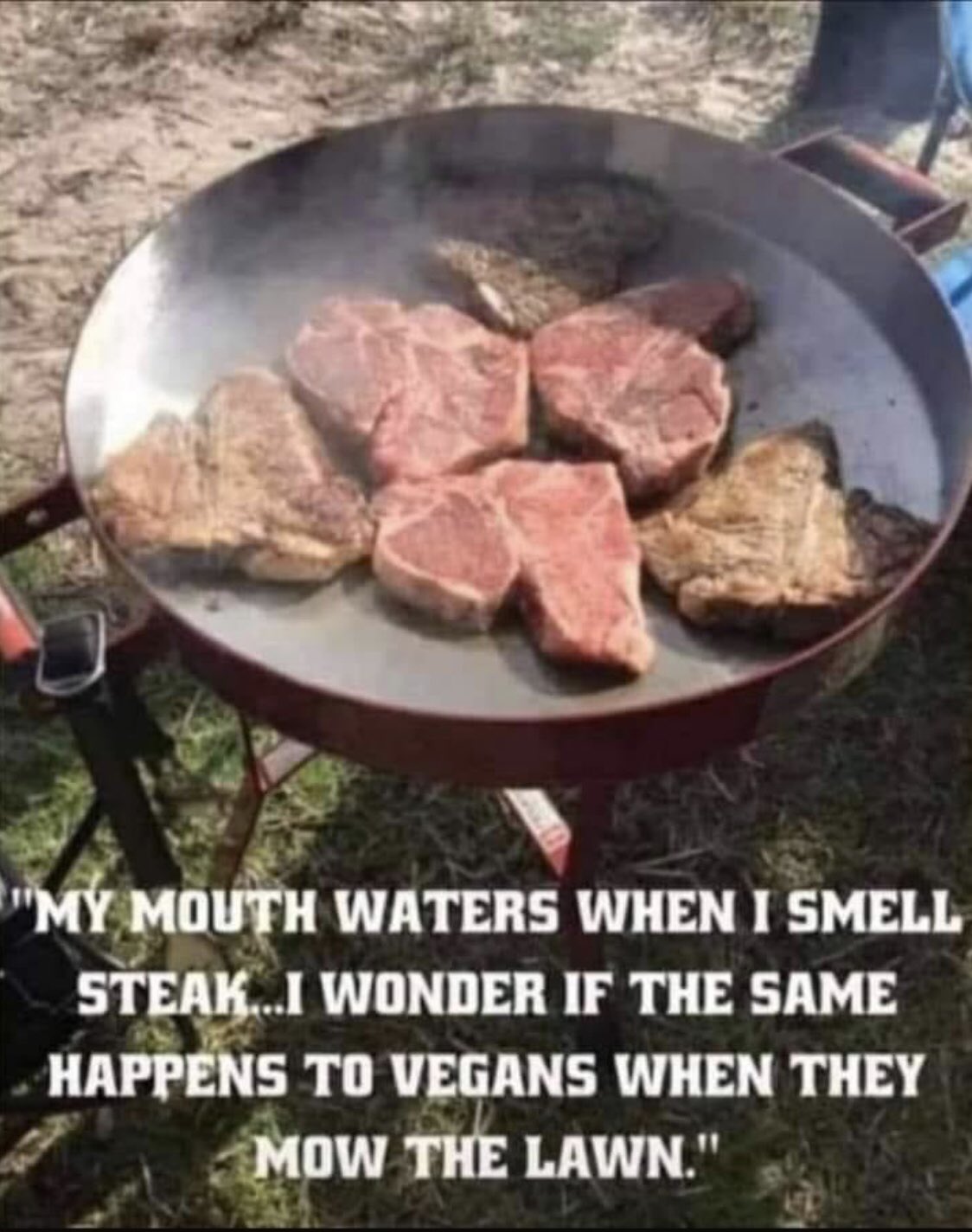 The NSPCV is looking for a humane way of ‘putting brussel sprouts to sleep’ before the cooks boil them alive. This is, of course, a pilot study that can then be applied to other veg in due course. The Veg never attack or harm anyone but the Veggies show them no mercy at all in the kitchen (otherwise known to The Veg as ‘the torture chamber’).

I have a pet apple tree, yet visitors think nothing of eating the apples or slicing their skins off when they are still alive. Nobody gives a second thought to the apple, all they worry about is the maggot that they have just been bitten in half.

If humans were to displace herbivores and eat vegetation directly then it will allow our number to increase enormously. Such a vast host of humans will generate more waste products and consume more raw materials than the planets ecosystem can cope with by recycling and regenerating naturally. Indeed this is happening now and typically in predominately vegetarian societies – as one would predict – and Hom.Sap. is probably now approaching  plague proportions. If we all remain omnivores, eating far more meat, then the number of humans that can be sustained by such a culture is limited to a much lower ceiling that the natural ecosystem can easily handle. Vegetarianism is fundamentally very inefficient and a scandalous waste of natural resources. It is far more efficient overall to let herbivores convert vegetation to meat first; meat is essentially a concentrated form of vegetation. Apart from that it is very unfair (one could even say fascist) for the Veggies to go off to steal and eat all the grass that is birthright and property of the animals. The Veg that are true ‘innocents’ as in general they do not consume other life forms to survive.

We humans are animals and the only way we can survive is by consuming other life forms. We have evolved by eating a varied and balanced diet of meat and veg, and that’s what we require to develop into balanced, well adjusted adults. Logically there is no more reason to say that animals have any more rights not to be eaten than vegetables. Indeed it seems that The Veg were on the earth first so presumably they should have priority when it comes to rights.

If the Veggies really want everyone to become vegetarian then it will be necessary to reduce the enormous numbers of animals that are now reared for meat. This will mean killing them (indeed wiping out some entire species) and if you do that then why waste the carcasses? Even worse it may be necessary to subject them to a major programme of family planning and abortion or culling (to prevent them over populating) against their will and then you are in big trouble with the Animal Rights Activists and the Civil Liberties Groups. You could perhaps retire them to the country parks or ‘set aside’ land, if allowed by EEC rules, but even then the generated methane will still be a major ‘greenhouse’ threat.

It is now well known that we Humans have some 98% of DNA in common with chimpanzees. Not so well known is that we also share some 60% of our DNA with bananas. Eating bananas is practically cannibalism. As such what % of DNA is the threshold above which the Veggies will not eat?

The ‘death chemists’ are now hard at work, their hands dripping with the sap of vegetables, distorting the genes of natural vegetables to make them more ‘productive’ and succulent. The last thing that vegetables want is to be made more appetizing, unless for some strange reason, you believe that they really do want to be eaten.

All the objective research has shown conclusively that meat eaters are more intelligent and tolerant than Veggies so abstaining from meat clearly has a catastrophic effect on the reasoning ability of the brain. Six million years ago our earliest ancestors were vegetarian and lived like the great apes do now (perhaps a 1% meat diet at most). The greater energy content of meat (particularly bone marrow) was essential to drive our ever larger, evolving brain. Homo habilus probably required a 20% meat diet and early Hom. Sap. and Hom. Neanderthal 50% or more.  (It was only a mere 10,000 years ago we even started to eat more veg). It was the giant evolutionary leap of ape kind to eat more meat that enabled him to evolve into the urbane, witty, Hom. Sap. we are today.

It is true that it is now possible to live a physically healthy life without eating any meat. It also possible to do so without ever going on holiday, to the theatre, playing sport, reading poetry or watching TV. Only a moron would want to live like that.

They are now breeding a better type of Beef Cattle and they are going to call The Quorn Longhorn.

Finally – how would you like to be held up to public ridicule on TV by Ester Rantzen if you happened to be a giant, misshapen parsnip that looked like a willie.

There has been a very high profile coverage given to vegetarians on the radio of late and I find that their logic is still just as crackpot and pretentious as that of my ex-wife friends. I would like to see you give some positive response to their crusade whenever they have media exposure.

If the NSPCV is of interest to you and you feel that it has some potential then please contact me and we can discuss it further.

Note – A vegetarian is an old Indian word for a bad hunter.

And the ultimate question is ‘do potatoes have a soul?’

(I think that the reason for this sad state of affairs is the remorseless brainwashing of young kiddies with books about talking animals, behaving like little humans, but none about cuddly, friendly, chatty vegetables. We need some good books about Thomas the Tomato with his shiny red coat, Lucy the Lettuce, always at the mercy of the savage, murderous rabbits and the exciting adventures of Peter the Potato.)