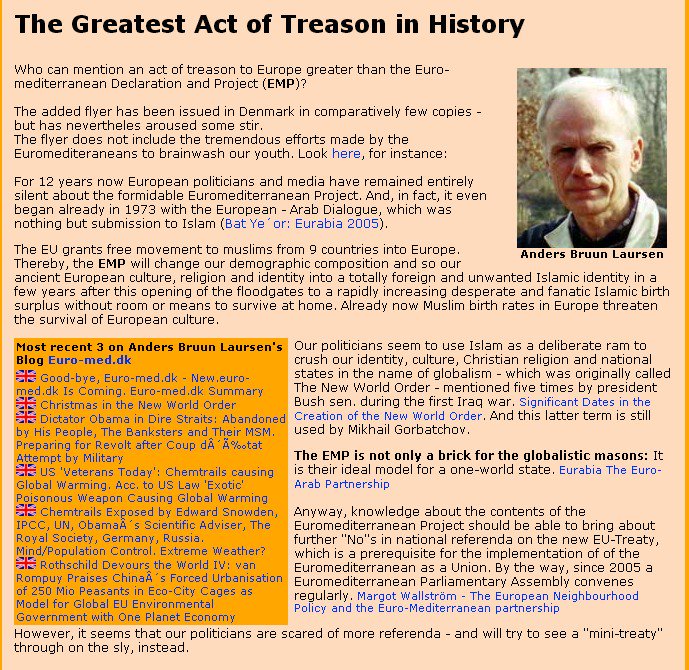 Each year the EU award a Charlemagne prize and very other year a Coudenhove prize to the politician or Bureaucrat who has made a major contribution to ever closer union and the Coudenhove Plan.  see The EU/UN new World Order Plan – The Genocide Of The Caucasian People Of Europe and Agenda 21  http://www.theeuroprobe.org/2013-044-couden/

Its aim is for Europe and the UK to be flooded with people from Africa and the Middle East to mix and form a new population called the Mestizo people to replace the white Caucasian people.

We also have the curious and never mentioned 1995 Barcelona Convention (is it a Declaration or Treaty? it has all the attributes of an unsigned Treaty) between the EU and the African states of the southern Mediterranean rim. Superficially it was to improve the water quality of the Mediterranean sea.

Not much is said about it but seems to have has within its remit to eventually form a new state of Eurabia. The EU and the North African states would combine to form a new state. This would allow all the peoples of N Africa free and unfettered access into Europe as citizens of Eurabia.  It is a French/Arab initiative to counteract US domination. It originated with De Gaulle who was distraught at the loss of Algeria and the dominance of the USA. Whether it is just a cooperative Convention or  Treaty between Europe and Arabia to ease tensions and protect the seas or rather more is something about which the reader must make up their own mind. The treaty is claimed to be a precursor for the new state of Eurabia and to consolidate the EU Coudenhove plan.

It should be noted that this Agreement requires that respect for Islam was ‘guaranteed’. That could only do so by ERODING the freedom of choice, speech & expression of its existing citizens. In doing so they confirmed their tyranny.

The UN had a proposal to make criticism of Islam be make a criminal offence that was lost by 1 vote. A similar proposal went through the UK parliament (with virtually no publicity) and again was lost by one vote.

Abstract from the Barcelona – Euro Mediterranean Declaration of 1995:

The Euro Mediterranean Declaration was agreed upon by the EU, Morocco, Algeria, Tunisia, Egypt, Jordan, the Palestinian Authority, Syria, Lebanon, Turkey and Israel and comprises:

Comprehensive political partnership, among other things about:

The EU Offers the Populations of 9 Muslim Countries Free Movement of Goods, Services, Capital and People into the EU

In return for concrete political and economic changes the EU offers partners´integration into the expanded internal market of the EU and the possibility to obtain free movement for goods, services, money and people.

Association agreements have been made with all partner countries except Syria – which will be offered association in 2009. (Abstract of the 6. Euromediterranean Foreign Minnister Conference in Naples 2-3 Dec. 2003).

Confirmed by the Danish Prime Minister on Aug. 28, 2006 in a correspondence where on Sept. 12, 2006 he refused to tell why he, the government and media have concealed the Euromediterranean Project for 11 (now 13) years. On Jan. 7, 2009 he refused once more.

The EU Offers the Populations of 9 Muslim Countries Free Movement of Goods, Services, Capital and People into the EU.

“So far, only the ancient Romans achieved this: The Union for the Mediterranean is created.” Nicolas Sarkozy: “We will make the Mediterranean basin an area of peace and will build it up as we have built up the European Union” (ANSAMED 14 July 2008).

43 leaders from Europe and the Mediterranean countries met (in Paris) with UN Secretary General Ban Ki Moon and EU Commission President José Manuel Barroso. In addition, representatives of the World Bank and the European Investment Bank, the Arab League, the Islamic Conference Organization and the Maghreb Union were present – a forum at the highest level. (Der Spiegel Online 14. July 2008).

2002, Louis Michel, then Belgian Foreign Minister and current member of the European Commission: “The EU will cover the whole Mediterranean region including North Africa and the Middle East.” (Brussels Journal 27 March 2007).

Morocco on the way into the EU

“At the seventh meeting of the EU-Morocco Association Council, the EU has approved a package of measures to strengthen the partnership with Morocco on political and security issues, a comprehensive and deeper free trade agreement, the gradual integration of Morocco into a number of EU sectorial policies and the development of people-to-people exchanges ” (EU Press Release 13 Oct. 2008).

‘Cultural policy must avoid the popular distinction between ‘them’ and ‘us’, even mentioning ‘the other’, as this opens the gate for imposing collective identity on the individual’. (Traugott Schoefthaler, former head of the Anna Lindh Foundation, a Euro Mediterranean propaganda apparatus). See Dialogue to Hospitality (pdf).

The Danish Foreign Ministry is educating us from our ‘stereotypes and prejudices’ towards Islamic culture – and so reflects the program of the Euromediterranean propaganda apparatus: the Anna Lindh Foundation, founded by the Arab League, the EU, the European Council, and the UNESCO:

‘We will tackle stereotypes and prejudices and ignorance and change the daily ‘news journalism’ to portray every-day life of ordinary people, which can create identification and fascination – and intercultural understanding. We will tackle our stereotypic images of people from foreign cultures and make new experiments with pictures in public places, in the media, and advertising.

And we will have common projects with people from other cultures. We will develop the intercultural skills of journalists, school pupils and artists and exchange people from these groups with (muslim) colleagues. We will manage art and cultural productions. We will train the school teachers and influence their education to be multicultural.

And we will influence the curricula of the schools to become multicultural by means of revision of existing textbooks and educational materials.

We will arrange giant Muslim Youth Festivals – like the ‘Images of The Middle East‘, which lasted 6 weeks in 2006 in Denmark.

Also read the Speech by the head, Olaf Gerlach Hansen, of the ‘Danish Center for Culture and Development’ (CCD) – run by the Danish Foreign Ministry – on the 13.05.2005 in Rabat

In a correspondence, the Danish Prime Minister on Sept. 12, 2006 refused to inform why his government gives in to the above educational policy initiated by the Arab League and the EU.

The EU and the Danish governmental CCD have signed a cooperation agreement with the Islamic Education, Scientific and Cultural Organization, whose goal acc. to art. 5a of the ISESCO-Charter is to spread Muslim thinking and life style throughout the world. I | II

The Euromediterranean is a step toward world government

The following intentional conduct is punishable in all EU Member States: – Public incitement to violence or hatred, even by dissemination or distribution of tracts, pictures or other material aimed at any group of persons or a member of such a group defined by reference to race, color, religion, descent or national or ethnic origin.

Public defense of denial or gross trivializing of the crime of genocide, crimes against humanity and war crimes as defined in the Statute of the International Criminal Court of Nuremberg (Articles 6, 7 and 8). Such conduct is punishable under the Penal Code with a minimum of 1-3 years imprisonment. (Framework Decision on Racism and Xenophobia – Full version)

The European Arrest Warrant now allows the extradition of e.g. Danish nationals to any EU country that may require it – even for offenses that are virtually no crime in Denmark – but, for example, in Germany, which can mean a difference between a 60-days suspended jail sentence in Denmark and 5 years’ of unsuspended imprisonment in Germany for the sale of Nazi music (Berlingske Tidende 22 December 2008) In English: I | II .

Newspapers, radio and television are controlled from above and keep silent on the Euromediterranean Project/Union for the Mediterranean

‘The Freedom of expression is central to the values and traditions of Europe. But its preservation depends on responsible behaviours by individuals.

By extension, we do not believe the media should be regulated from outside, but rather that you find ways to regulate yourselves.

In considering the question of self-regulation, I would also ask you to think about the need for monitoring from within your own professional bodies. I am convinced that will have a significant impact.’

(Benita Ferrero Waldner, EU-Commissioner for External Relations and the European Neighbourhood Policy to selected media representatives from the Euromediterranean zone in Vienna on May 22, 2006)

Here is a firework display of suggestions to stifle the freedom of speech in the EU: Racism, Xenophobia and the Media (pdf)

European journalists are intimidated at the meddling of politics and business with their editorial guidelines – even threatening them with imprisonment: Europäische Journalisten schlagen Alarm | Google Translation

EXTRA BACKGROUND: This folder made nation wide headlines in the media after an immigrant postal employee in the city of Alleroed felt offended and did not want to deliver the folder. A short strike resulted. By contrast extremely liberal attitudes toward left wing extremists. A little background for the media attention

The Greatest Act of Treason in History

Who can mention an act of treason to Europe greater than the Euro-mediterranean Declaration and Project (EMP)?

The added flyer has been issued in Denmark in comparatively few copies – but has nevertheles aroused some stir.
The flyer does not include the tremendous efforts made by the Euromediteraneans to brainwash our youth. Look here, for instance:

For 12 years now European politicians and media have remained entirely silent about the formidable Euromediterranean Project. And, in fact, it even began already in 1973 with the European – Arab Dialogue, which was nothing but submission to Islam (Bat Ye´or: Eurabia 2005).

The EU grants free movement to muslims from 9 countries into Europe. Thereby, the EMP will change our demographic composition and so our ancient European culture, religion and identity into a totally foreign and unwanted Islamic identity in a few years after this opening of the floodgates to a rapidly increasing desperate and fanatic Islamic birth surplus without room or means to survive at home. Already now Muslim birth rates in Europe threaten the survival of European culture.

Our politicians seem to use Islam as a deliberate ram to crush our identity, culture, Christian religion and national states in the name of globalism – which was originally called The New World Order – mentioned five times by president Bush sen. during the first Iraq war. Significant Dates in the Creation of the New World Order. And this latter term is still used by Mikhail Gorbatchov.

The EMP is not only a brick for the globalistic masons: It is their ideal model for a one-world state. Eurabia The Euro-Arab Partnership

However, it seems that our politicians are scared of more referenda – and will try to see a “mini-treaty” through on the sly, instead.

Are we helpless against these dictatorial initiatives by the EU?

No. If we can mobilize enough protesters via the blogs, we might gain access to the media.

Especially if we give notice to terminate our newspaper subsciptions, if these papers will not bring our protests. Mass protests could still turn our politicians away from their dangerous way to the Euromediterranean dictatorship and sharia.

Can we organize to stop the Euromediterranian frenzy?

EXTRA BACKGROUND: This folder made nation wide headlines in the media after an immigrant postal employee in the city of Alleroed felt offended and did not want to deliver the folder. A short strike resulted. By contrast extremely liberal attitudes toward left wing extremists. A little background for the media attention