The object of this proposal is to ensure the British do not lose their country by stealth by 2060 without stopping people from abroad from improving their lives in Britain. The life styles of Migrants’ will not be affected in any significant way so long as they obey the laws of the UK.

The problem with immigration is not the people who migrate to your country  but it is the numbers and when those numbers start to exceed your countries own population numbers that is when migration into your country becomes a very serious problem.

I would suggest that the reason Khan is allowing violent crime to proliferate is to encourage Londoners to leave London. He has said he would like 1.5 million more migrants (Muslim migrants to replace Londoners?) into London. This is surely a means to secure a permanent Muslim Mayor and London to become a Muslim City.

The original pamphlet sent to us – ‘Do We Want a Mayor’ said that anyone who worked in London could stand as Mayor.  So anyone who works in London should have a vote for Mayor. It also said the cost of a mayor would be 3p/week on a band D house. The cost is now about £300 + parking + congestion charge + pollution charge + Dartford tunnel charge + penalties. Not what we voted for when we voted for a mayor.

Copy of this pamphlet is at the bottom of this post.

I would also suggest that when the voting Muslim population of London exceeds that of the English Khan will want London to be hived off from the UK to become an independent country and rejoin the EU.

The UN and EU want the world population to be a single breed – Coudenhove’s Mestizo people. To that end they want mass migration from the third world to mainly western white countries to water down and eventually eliminate the white Caucasian DNA. If you want your grandchildren to be in your image you must work to stop this. When you vote make sure you know what the candidate really intends when in power not what they say in public to get your vote.

There is considerable pressure on Caucasian parents to have only 2 children or none to help save the world. That means the Caucasian population will steadily diminish. The average Afghan woman resident in the UK has 4.25 kids The average Somali woman here has 4.1 kids The average Pakistani woman has 3.82 kids. By contrast, the average White British woman has 1.7 kids. (lower than during WW2). We’re not afraid of minorities, we’re afraid of becoming a minority in our own country. This is not someone’s opinion but a straightforward statement of a mathematical fact.

The UK government are to build 60000 houses for illegal migrants. What for if they are to be deported. Clearly, the government has no intention of deporting them?

Our parents & ancestors built many networks by dint of very hard work and using the countries wealth. E.g. electricity, water, roads, railways, sewage, the NHS, rubbish removal, national parks, libraries etc. Should migrants be entitled to freely use them having contributed nothing towards them? Should they pay an extra tax if they do?

The end game for the Muslims is to outnumber the native Brits by mass immigration and outbreeding then take over the UK and convert it to Islam.

Overwhelmingly the selection procedure for judges must be changed. Blair ensured that only lifelong Left wing activist barristers can be appointed to be judges  read  http://www.theeuroprobe.org/2020-11-the-appointment-of-judges-and-magistrates/

The Maastricht Treaty made us all EU citizens in addition to, but not above, UK citizenship. However, since then the ECJ has continually made rulings that give EU citizenship more and more primacy – the EU Salami slice principle. Eventually, UK citizenship would cease as presumably the intention of ECJ was to continue to do so in the future until EU citizenship had complete primacy. As such UK citizenship would have become secondary and eventually removed completely. Not so now we have left the EU but as this was written before UK left much still applies as we are still under some EU law.

Proper British citizenship will have to be reinstated post-Brexit exclusively for Britons.

Additionally, all Political Correctness must be removed along with Hate Speech. They are Marxist techniques to intimidate and control the public.

Similarly, Devolution must be redefined. It is an EU requirement to enhance the dismantling of the UK. It has not been a success for the Bitish people.

It should also be noted that the United Nations has ambitions to be the world government on a crypto Marxist basis. see http://www.theeuroprobe.org/2016-030-the-un-new-world-order-for-the-enslavement-of-mankind/ The UN is nothing like it was set up to be having been systematically hijacked by the hard left and now China  and Islam. The UK (and the US) should pull out of the UN and expand the Commonwealth to include those countries that have democratic standards. 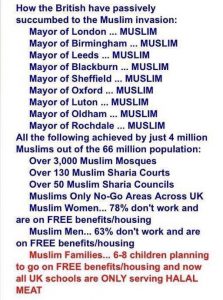 Post-Brexit we will have to reinstate full UK citizenship. It will be a new beginning and we will have the opportunity to put right the many mistakes of the past. First, we need to withdraw from the UN Migration Pact (which May signed us up to without it being discussed and voted on in parliament), Leave Dublin III and reinterpret the 1951 UN Refugee convention with a UK Migration convention.  Refugees of today are quite different to those of 1951 and are now mainly economic migrants, We need to set up our own Migration/Asylum policy as agreed in parliament.

Refugees will come under the same conditions but will be entitled to temporary sanctuary and limited benefits until it is safe to return to their home country. Once their country is deemed safe they must return there. They will have no choice of location of accommodation but wherever available. They must report regularly to the local police to ensure they have not absconded. If they do abscond and are caught they must be returned to their home country.

Those convicted of a crime with a custodial sentence 6 months or more are deported immediately after their sentence is completed with their nuclear family with no appeals.

Other appeals – only one appeal is accepted and any legal aid has to be thoroughly justified by a judge who is not a Common Purpose alumnus. If it fails the solicitor will not be entitled to further public funding. Only UK citizens are normally entitled to Legal Aid. Solicitors who act for an asylum seeker must act on No Win No Fee and if they lose they are liable for the costs incurred by the state.

Photo ID is now essential in polling stations. Replace postal voting with an App for a mobile phone or iPad where the voter is sent their personal secret passcode that they enter with their email or ID. The App then opens up where there is a list of candidates each with two links. One link to the candidate’s CV and one link to vote. Where the voter does not have a mobile they can vote in the Polling station, local library or via a friend’s iPad.

Military overseas and ex-pats will then be able to get their votes registered in time instead of losing out due to late post.

If a ‘refugee’ has no passport and refuses to give his country of origin he is put in quarantine until he fully explains himself. Give him an EU passport with a 6 month life with a no return to UK clause. Land of origin can usually be determined by a DNA test. Give them 6 one monthly payments of £100 to help them settle themselves somewhere of their choice.